Libertarians, Gay Marriage, and Freedom of Association: A Primer 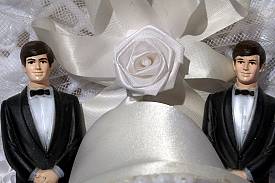 How can a libertarian support gay marriage but also the right of businesses to decline to provide goods and services such as cakes, wedding dresses, and photographers for gay weddings? For many libertarians, it makes perfect logical, philosophical, and legal sense.

But from the outside perspective, it often does not. As a result, critics looking for an opportunity to throw shade on the increased media and public interest in libertarian ideas can focus on just a piece of this mentality. We saw the Village Voice do just that recently, as media critic Roy Edroso incorrectly declared that we here are “more likely” to defend the rights of private individuals and businesses who want to discriminate against gays than the rights of gay couples to demand marriage recognition from the government.

Reason Editor-in-Chief Matt Welch already responded by highlighting our lengthy history of support for gay marriage, going all the way back to 1975. As a gay libertarian who writes frequently on both components, perhaps I can help illuminate some concepts here and explain why arguing that gays have the right to marry each other and arguing that businesses have the right to deny them goods and services are fundamentally connected to manifestations of the same right: freedom of association.

The Way You Libertarians ‘Support’ Gay Marriage Is Kind of Weird

That’s not a direct quote from anyone in particular, but is my interpretation of how libertarian attitudes toward gay marriage are perceived by many on the left, particularly whenever libertarian issues pop up on gay blogs.

To get really basic, libertarians generally believe the power of government should be limited to what is necessary to protect the rights of the citizenry. There are a lot of different ways this belief manifests among libertarians and different libertarians draw the line in different places—there’s as much variety of opinion among libertarians as there is among progressives and conservatives—but this is the underlying philosophy and it influences where a libertarian comes from. Freedom of association is one of these rights—the inherent right of human beings to choose with whom they want to spend their time and money, to unionize with, and to sell goods, services or labor to without unnecessary government intrusion.

It’s important to understand then that libertarian support for same-sex marriage and civil liberties for gay people in general is not a result of how libertarians feel about gay people. It has nothing to do with whether an individual libertarian actually likes or is comfortable with being around gay people or even whether a libertarian thinks homosexuality is a natural outcome of biological diversity or whether gay people are going to hell. Support for same-sex marriage is a result of a belief that gay people, just like heterosexual people, have the right through freedom of association to create their own families and expect to be treated the same way under the law. Laws forbidding recognition of gay marriage are a government intrusion on this inherent right.

If You Guys Support Gay Marriage, Why Do You Keep Wanting to Get the Government Out of It?

You shouldn’t need a license from the government to express or commemorate your rights. For many libertarians, just having licensed marriages at all is an imposition of unnecessary government control. Many libertarians do not believe that the government has a legitimate stake in determining who should or should not be allowed to declare themselves to be married. (Note that the question of whether the government has an actual stake in restricting marriage to heterosexuals is frequently asked in current legal challenges against the bans, resulting in some rather strange arguments from opponents claiming that allowing gay marriages will somehow result in fewer heterosexual marriages.)

Unfortunately for a free people, governments everywhere have tied all sorts of privileges, regulations, and benefits (and sometimes penalties!) to marital status. Many libertarians believe that many of these rules should not be tied to marital status and often shouldn’t exist at all. Marital relationships should be handled by private contracts, which would still require some government involvement, particularly once children are introduced, but generally would not be subject to a federal or state stamp of approval.

Though the “get government out of marriage entirely” response is a typical refrain from libertarian-leaning conservative politicians who have been getting attention in recent years, nobody has really introduced a system by which that could happen or truly expressed a vision of how the government would disentangle itself from the many, many policies it has already put into place. For many libertarians, supporting same-sex marriage is then an imperfect but acceptable solution for now. Married gay couples should be treated the same under the law as heterosexual couples. Some other libertarians, however, are holding the line, worried that this compromise expands the power of the state to define relationships, and would rather force the government to surrender its authority to determine who can and cannot be married entirely. But either way, it’s important to note that both outcomes give gay and lesbian people much more actual freedom to create their own families than they have had until recently.

If You Support Gay Marriage What’s the Deal with Permitting Discrimination Against Gays?

If you philosophically believe in a particular right, it should naturally follow that a right extends to everybody, including those who disagree with you or even hold positions you find detestable. Those who believe in freedom of speech typically understand that one outcome is that certain people will say bigoted things. But since we all equally have free speech, we have the freedom to criticize and oppose the bad things that other people say. Many Americans, regardless of political leaning, oppose censorship because we understand it’s a slippery slope and the expression of government power can be used to censor more than bigoted speech. It could be used to by those in control to curtail the right to criticize authority.

The belief in freedom of association, therefore, obligates us to respect the right to refuse to associate with certain people, even if bigotry is a possible reason for that refusal. A Christian baker shouldn’t have the authority to stop a same-sex couple from getting married. But the couple shouldn’t have the authority to require a baker to make them a wedding cake for the ceremony. Freedom of association in the world of commerce requires us to accept the right of both sides to determine with whom to do business. The same right that calls for the government to recognize same-sex marriages also permits the baker to refuse to provide a wedding cake.

The slippery slope here is easy to explain by invoking Nazis. (Why is it always Nazis?) Should a baker be required to make a cake with a big swastika on it on behalf of a Nazi customer? If you believe the answer to this question is “no,” then understand that giving the government the ability to restrict freedom of association could result in an outcome that forces the baker’s hand here, as absurd as it may seem.

Should a Baker Be Able to Refuse to Sell a Wedding Cake to an Interracial Couple?

Many libertarians would say yes (including myself—so much for public office). Yet America’s history of very serious discrimination against blacks, much of which was not just permitted but enforced by the government and through legal channels, has influenced the way many people see freedom of association. This outcome is understandable, but whenever we talk about restricting a right (and libertarians generally acknowledge that rights may be restricted when they interfere with the expression of the rights of others), the restriction must be considered within the scope of all potential solutions. Restricting a right is a form of government control over individual liberty. Once we accept allowing the government to restrict freedom, it is very difficult for the public to control how this power may manifest later; thus, our resistance to censorship.

It is very difficult to argue that a wedding cake is a necessity for any human being of any race, religion, or sexual orientation. A person does not need a wedding cake to survive. As humiliating as it may be to be refused a cake for bigoted reasons, there’s no physical or economic harm being done to somebody refused a wedding cake.

Nor does the denial of a wedding cake deny the ability of a gay or interracial couple to actually acquire a wedding cake from another source. The existence of marketplace alternatives is another reason why libertarians would be reluctant to restrict the baker’s freedom of association. This is far from “redlining,” where banks and insurance companies colluded and denied loans and insurance to swaths of minorities in inner city neighborhoods. As unpleasant as these anti-gay discriminatory acts are, they have been shown to be isolated incidents scattered across the country in situations where the victims had the ability to remedy the situation by turning to other businesses.

Just as a libertarian’s general support for same-sex couples to define their own partnerships and families isn’t an endorsement of homosexuality, a libertarian’s general support for the right of a business to refuse to engage in commerce with somebody shouldn’t be taken as an endorsement of bigotry. In order to restrict a person’s right to freedom of association, the damage caused by the outcomes must be very high. Having to select a different bakery or photographer, many of whom would love to do business with gay couples, does not rise to that threshold.