During the May 27-May 29, 2022 LP National convention, an unusual point of order was raised by delegate from Massachusetts, Brodi Ellwood. After some parliamentary back-and-forth, the point of order resulted in righting a grievous wrong perpetuated by the LNC eight months earlier.

To understand context, we must travel back in time to September 2021 when Caryn Ann Harlos (CAH) was evicted from her position as LNC Secretary. Without picking nits, she was essentially ousted from her duly-elected role as a calculated and punitive political move in order to punish her for her vocal support of the Libertarian Party of New Hampshire during an attempted illegal takeover/coup earlier that year.

Specifically, Harlos took issue with the surreptitious aid, guidance, and direction provided by LNC Chair Joseph Bishop-Henchman (JBH) to the perpetrators of the coup. She called out this egregious malfeasance and demanded transparency, oversight, and an immediate cessation of meddling into the affairs of LP state affiliates.

For this, she was punished. Harshly.

The LNC’s executive committee used backhanded and illicit tactics to censure her and then remove her from her position, citing “dilatory” conduct as a scapegoat for their decision.

The Rot of the Party Goes Deep

This disgusting situation involving CAH epitomizes the insidious rot that infested the “rank and file” of the party leadership (and yes, in this context ‘rank and file Libertarian’ is not an oxymoron, which is exactly the problem).

The best and purest political party in history was corrupted from the top down; it preferred ‘civility’ at the expense of justice; it idolized political “respectability” versus recognizing that as Libertarians we are in a literal war with the belligerent State which seeks our party’s destruction and to enslave free men and women. With this alignment of priorities, the LNC weaponized “decorum” against one of the best and brightest our party has to offer.

To use a well-known naval analogy, if a deckhand sailing in freezing waters spots the “tip” of an iceberg rising above the waterline, it portends a far larger mountain of ice below the surface.

In this case, the malfeasance of Joseph Bishop-Henchman which Caryn Ann Harlos exposed was the tip of the iceberg. Yet even that “tip” was monumental in size and monstrous in its implications.

Yet, what lied calmly beneath the surface was far more pernicious.

For if malfeasance and corruption itself could seemingly be so publicly tolerated (and even encouraged) within the national Libertarian Party—and if “the ends justify the means” would be the calling card for those in office seeking to maintain the status quo at all costs—then the LP was indeed no better than the two other major parties it pretended to fight so fiercely!

That essentially is the “drama” CAH was able to stir up to the surface. She cast a spotlight on an iceberg far larger than anyone thought possible!

And to the fear, amazement, and incredulity of most everyone paying attention, few in leadership seemed to care about internal corruption. Not only that, but the whistle-blower herself was the one punished in order for the party to save face!

In our venerable Libertarian Party, in a party that decries itself as standing for Truth and Liberty and Justice—not just as buzzwords but as integral elements of our political DNA—in THAT selfsame party the worst forms of injustice took place and criminal malfeasance was covered up, brushed under the rug, and the whistle-blower silenced.

This, readers, is completely unacceptable.

NOT IN MY LIBERTATIAN PARTY!

This rot that led to a cesspool of corruption and politically-motivated censorship thus sums up as a quintessential example everything that was wrong with the LP.

Our Libertarian party, in its self-righteous and blind pursuit to be as “respectable” as its two mainstream peers, followed their tactics far too closely; it played in the mud and pretended it couldn’t get dirty. But when the sun shone on the leaders of the party, a pink flame revealed its true colors.

The LP of yestermonth was far more interested in virtue-signaling, condemning “mean tweets” as irrational and repugnant, and working hellishly hard to bridge a gap with progressives and left-leaning moderates than they were focused on presenting a true third option that actively fights government oppression!

The LNC failed to recognize that Libertarians by-and-large don’t want to be part of a party that tries to flirt with “acceptability” in order to appear more respectable to statists.

Ron Paul Libertarians don’t wish to be a “slightly better” breed of Democrats or Republicans. DAMN NO!

We are Libertarians. That means something! We stand apart and for something real. We call for the drastic reduction and/or complete destruction of the omnipresent state! We are beyond tired of playing a weird and confusing game that might somehow “trick” unassuming people into embracing freedom.

Libertarians must be bold and inspiring. We must shout to the rafters that the state is EVIL and those that support removing our freedoms are not our friends and not to be supplicated to, placated, or appeased. They are our enemies. They must be FOUGHT. They must be defeated.

The legacy LNC believed milquetoast messaging that didn’t ‘rock the boat’ would miraculously grow the party and/or not “turn off influential donors.” Their tactics failed, and have clearly failed for over a decade.

You cannot grow a party and excite real change with vapid woke messaging that might appeal to Progressives. And in a Dystopian era when people were being told they weren’t essential enough to work and/or should be locked in their houses and/or at the risk of losing their job forced to obtain the product of a pharmaceutical company–we cannot as a party use that pivotal moment in history to speak against … civil asset forfeiture (?!?).

The previous LP wasn’t just tone-deaf; they were completely blind, deaf, and dumb. CAH was saying these same things as she defended the NH affiliate against LNC persecution and criminal inaction. She was speaking for and defending the Libertarian message; but those in charge of the Libertarian Party were deaf to her words.

During the 2022 LP convention’s May 29 vote to undo the decision and restore Harlos, Vice Chair Ken Moellman took a brief moment to explain to the convention body the effect and result of what was being voted on. He then referred to this as correcting a “parliamentary Whoopsie” that effected Harlos suspension and the removal from her seat. This was a very interesting use of language.

Despite all his charm, likeability, and good-naturedness, Ken actually (jokingly) referred to what happened to Caryn Ann Harlos as a “whoopsie!”

This off-hand remark is perhaps a small thing to focus on. But let us correct the record:

What happened to Caryn Ann was not a “whoopsie” or a “gee wilikers, I guess accidents happen” sort of situation. It was a complete ABUSE of power by an LNC filled with people who had clearly forgotten how to determine right from wrong.

Their actions punished a whistleblower while completely ignored the crimes exposed by said whistleblower. The LNC tacitly supported (through inaction and silence) the THEFT of NH’s party assets, and also tacitly supported its chair JBH and his hostile and malicious involvement in the affairs of a local affiliate.

So Please – Let’s Call Things What They Are!

This behavior is not Libertarian (small L or capital L). This is not what we as Libertarians stand for. It’s not who we are. We are so much better than this.

So when you read about a “Hostile Takeover” of the Libertarian party and if at this time you still are scratching your head asking yourself “how and why did this happen?” please go back to the top of the page and re-read what you just read.

And if you somehow still believe that thousands of “Alt Right Extremists,” and/or “Nazis” and/or “Racists” have now gained power, I kindly invite you to take another look.

Take note of the disease and rot that existed in the party that would look the other way to malfeasance and conspiracy to overthrow a local state delegate. Take note of the poor leadership which existed allowing a whistle-blower to be crucified for the sins of a morally-bankrupt chair.

Take note of a ten-year+ messaging strategy that was so uninspiring that Libertarians were embarrassed to call themselves part of the party. Take note of the fact that “Ron Paul” was actually a dirty word for many of those in power in the LNC!

But also take solace in the fact that this tragedy has now been turned into an amazing victory! The abysmal messaging and revelation of corruption inside the LNC was a lightning rod to galvanize the party into fixing itself and cutting out the rot that infested its head and torso.

The crucifixion of Harlos didn’t end with her body in a tomb; she politically died for the sin’s of the party (at least its feckless “leaders”), but yet she was resurrected May 28, 2022.

This fact is a tremendous testament to the power of courageous ideas and the strong integrity of the Ron Paul army who have decided to take a stand and/or reenter the party! The fall and restoration of Caryn Ann Harlos is a shining example that good CAN prevail over great evil and tremendous corruption.

If Libertarians can fight back the tyranny of vile human-garbage such as JBH and many of the previous “leaders” of the LNC, we can also march courageously forward and fight a FAR more tenacious and insidious threat: the State.

Let’s certainly celebrate these baby steps we are making to see a world set free in our lifetime. We have now “cleaned up our own room” and dispelled the demons of the past. The filth of JBH is washing away.

So let’s now look forward to the far more difficult villains: those in government that truly represent the greatest threat to our Party and free people everywhere. The future of our party is not behind us, it’s in front of us! The future of the LP is now inspired with new hope, and laser-focused on growth, winning elections, and leading a revolution. As it should have been all along.

A Final Word from Caryn Ann: 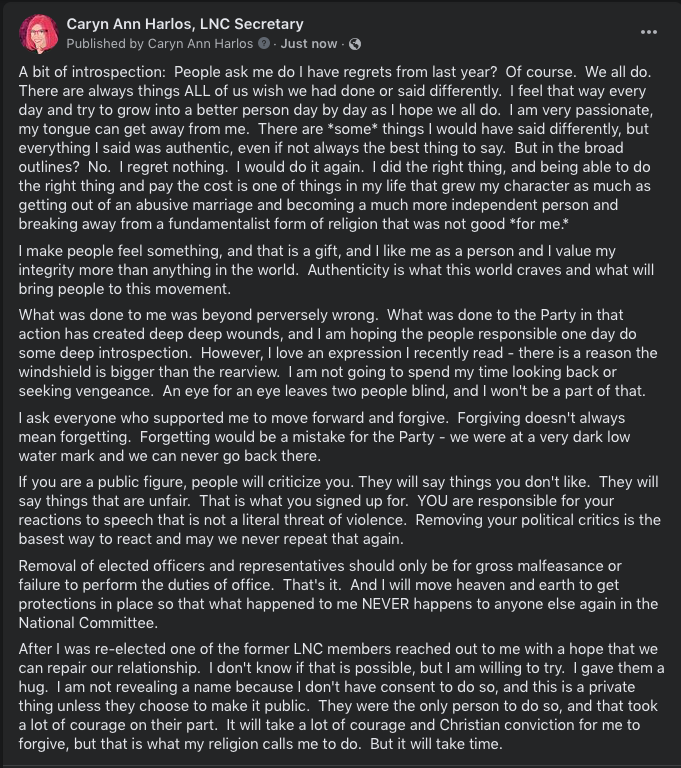 Every crisis becomes a religion. It’s inevitable. Especially if it lasts long enough. One factor in that transformation is the “Beautiful Theory” phenomenon. This is the phenomenon where those who sell news team up with those who seek to lead others and insist some remedy is urgently needed and politically correct — so it MUST […]

V for Vendetta is more than just a movie or another piece of mindless fiction…it is a testament of our time and rare exposé detailing just what can happen (and really what might happen in this country) if we allow our rights to be taken away. The history of Guy Fawkes circles around his 1605 […]

Ignore progressives on economic matters and they can make a whole lot of sense, with Glenn Greenwald clearly being the best that I have found. In a recent commentary of his, “The Patriot Act and Bipartisanship,” he continues to remain consistent in his defense of civil liberties and non-partisan outing of hypocrisy while recognizing his […]