Let me justify why i posted this meme, before i’m too-badly blasted by my lefter-leaning friends. 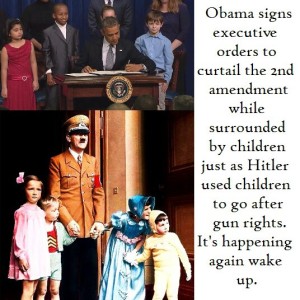 Children surround Obama as he diminishes the power of the 2nd amendment.

I usually despise the “Obama vs Hitler” juxtapositions as ridiculous and un-founded. So to clarify: I am NOT saying that President Obama is Hitler or that under his Presidency America will ever become a fascist, blood-hungry state. That’s lunacy and hyperbole only really espoused by some of the nuts on Fox News and Glenn Beck. I am NOT comparing the two, other than to make hopefully a stark point: the death of freedom is a gradual thing. Rights taken away at the alter of anything (fill in the blank – perception of more safety, government regulation or handouts as a doorway to a better life, etc) – ANY rights taken from the American people are a step in the wrong direction and against what our founding fathers laid out for this country. Now, if you are one of those who says that the Constitution was written by a bunch of old dead, racist white guys and no longer has any bearing on our way of life – I’ve heard this draconian argument and we simply can’t find common ground for a discussion. But for the vast majority of Americans who believe the US form of government laid out for us by our founding fathers allows the most amount of freedom and the greatest property and wealth – then know that ANY core freedom(s) ripped away from us is a vile and dreadful thing. Under the banner of “better safety” this happened before under Emperor Bush with the Patriot Act, and now the 2nd Amendment is further threatened by Obama. Not completely. Never completely. But the “frog jumps out of the scalding water, but boils in the pot of slowly rising temperature” argument is poignant here. Most importantly – remember this: the 2nd Amendment was not put in our constitution because it gives us a right to defend ourselves from terrorists or animals, etc. If it was this whole argument would be a moot point! It was put there because we (the People) have the moral right to defend ourselves from OUR GOVERNMENT if they cease to defend and protect the rights of the people. We are not there yet, mind you; but we are stepping along a precipice of freedom vs governmental control and provision of our very lives. And that’s scary. Read Hamilton’s view on the 2nd Amendment. Read the Madison’s Federalist Papers and it’s clearly outlined: we have the right (and moral obligation) to bare arms against a government which tramples on our freedom.

It’s clear to Libertarians that “[we] have the right to rebel as the natural right of resistance and self preservation, to be used only as a last resort, exercisable when ‘the sanctions of society and laws are found insufficient to restrain the violence of oppression'”.[47] The framers of the Bill of Rights sought to balance not just political power, but also military power, between the people, the states and the nation,[48] as Alexander Hamilton explained in 1788:

[I]f circumstances should at any time oblige the government to form an army of any magnitude[,] that army can never be formidable to the liberties of the people while there is a large body of citizens, little, if at all, inferior to them in discipline and the use of arms, who stand ready to defend their own rights and those of their fellow-citizens.[48][49]

Now some on the sensationalist far right (*cough* Glenn Beck, Sean Hannity, Rush Limbaugh) continue to say on their respective radio programs that Obama is doing all this (taking away our rights, growing the government, etc) because he’s mad for power and an insane, vengeful person. This is hyperbole and completely ridiculous!! The “far right” continues to lose their credibility because they love to overgeneralize and bastardize the truth. I firmly believe our President is well-intentioned and is trying hard to fight for the good (“his” good) of the country. But he is simply so misguided by left-leaning political agenda and a misunderstanding of both our constitution and general economics. So let me say again: OBAMA IS NO HITLER; but he is *ignorant*. And in a man as powerful as our sitting President ignorance is a very dangerous thing. Hitler was a true madman. And his lust for power and insanity was fueled by a government which allowed his power to consume him and breed true evil and brutality around the world in a way I don’t know has ever quite happened before. Obama is no Hitler; but Germany’s freedom and “soul” did not die overnight — it was a slow process and happened before they realized what had happened. It’s our duty as US citizens to fight for our freedoms. It’s our right to defend our freedoms at all costs. It’s our right and moral DUTY (according to Jefferson) to reject any attempt to cease personal liberty and fight it, tooth-and-nail. Because even the smallest slip in freedom makes it easier for the next to occur. And it’s a very slippery, steep road to serfdom.